Lure of the Dragon by Anna Lowe 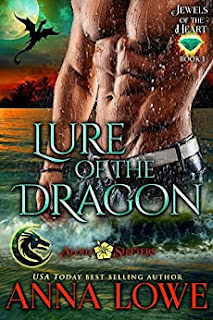 Kai can’t resist Tessa. Her emerald eyes mirror the mysterious pendant she wears, and her red hair makes his heart race. Is his inner dragon greedy for new treasure -- or is Tessa his fated mate?
'Buy' ebook free & get the matching audiobook at a huge discount!

Tessa took two shaky steps toward the ornate gate of the private driveway and stopped. Was she really going to do this?
You can trust them, Ella had said. Ella, the neighbor who’d come along at exactly the right moment and saved her life.
Tessa bit her lip. The fabric at the shoulder of her shirt was ripped, and her throat ached from the attack. Her fingers were still shaking, and her mind was haunted by visions of a terrifying beast. How could she trust anyone after what had happened less than twenty-four hours before?
You have to trust them. No one else can protect you from that monster.
Crickets chirped from the lush foliage, and a bat flew overhead, a splotch of black against the dark night. Palms swayed in the tropical breeze, echoing Ella’s words. No one else. There’s no one else.
Tessa shivered in spite of the balmy night, unwilling to trust her own senses. Sure, the sea was whispering over the shore in a reassuring way. And yes, the moon’s rippling reflection over the Pacific should be soothing, like the sweet scent of hibiscus. But even the island paradise of Maui could try to deceive her. Nightmares could break the deepest peace – real-life nightmares she couldn’t block out of her memory no matter how hard she tried. She could still see the glowing eyes of the creature that had attacked her.
Mine. You will be mine, his voice boomed in her mind.
She drew a deep breath and looked over her shoulder, wishing she hadn’t sent the taxi away. The past twenty-four hours had been a whirlwind. She’d barely slept, and fear pulsed through her veins like poison. How could she possibly judge whom to trust?
She tipped her head back at the stars and gulped. She was alone at night in a remote corner of Maui, far off the beaten track, about to knock on the door of a complete stranger for help.
A very rich stranger, she decided, inspecting the gate. There was an elaborate design in the middle, but she couldn’t quite make it out. Something swirly. Toothy. Wait – was that a tail? Shit, was it a dragon, or was she seeing things?
She shook the thought away and told herself to think. A gate that massive must protect a hell of an estate – a seaside estate in Maui that had made the taxi driver whistle when she gave the address back at the airport.
“Koa Point Estate,” he’d said. “You’ve got the right friends, miss.”
Tessa gnawed on her lip. These weren’t friends. They were complete strangers. And anyway, the man who’d attacked her in Phoenix was rich, too. Rich didn’t mean trustworthy – or even human.
A tremor went through her at the memory of her attacker’s fingernails turning into claws and reaching out for her. Mine. You will be mine.
Tessa shook her head and turned back for the road. Who knew what secrets lay behind that gate? It would be safer to head back to Lahaina and find a hotel for the night. After a good night’s sleep, she could–
The beams of twin headlights blinded her, and a powerful engine purred into the driveway. Tessa froze as a vintage Jaguar approached then stopped. For a moment, nothing happened, and Tessa considered whether to run, but her legs stayed rooted to the spot.
The driver’s door opened, and a tall man climbed out. Tessa squinted against the lights, trying to make out his face as he stood silently inspecting her for a full minute.
“Have you decided yet?” His deep voice boomed, making her jump.
Tessa clutched her bag to her chest. “Who are you?”
He stepped forward, and a tiny grin formed at one corner of his mouth. “Who are you?”
Tessa tried to form an answer, but her lips were shaking, as was the rest of her body. Was this man a potential ally or a deadly foe?
His dark hair and bright blue eyes contrasted with the pure white of his dress shirt, open at the neck. Sharp, angled features cast their own sub-shadows over his face. Tall and imposing, he seemed perfectly at home in the night.
Vampire, her subconscious screamed. He must be a vampire.
Tessa discarded the idea a second later. Surely a vampire would give her creepy vibes. Despite the fine cut of his clothes, this man exuded an untamed, animal feel, like a lion or a wolf. A predator just as capable of ripping an enemy limb from limb as he was of protecting the one he loved.
A little shiver went down her spine.
Tessa tried to shake the feeling off and collected her thoughts. She doubted he was a vampire. Ella had sent her to a band of shapeshifters, right?
“I’m Tessa. Tessa Byrne.”
She hadn’t intended to give her full name, but damn. There was something fiercely commanding about the man – that, and he was so blindingly handsome, even in the dimness of night – that her brain had short-circuited.
“So, Tessa,” he murmured like a man savoring a new brandy. “Have you decided yet?”
“Decided what?” she asked, taking another step back.
“Whether you’re coming or going.”
Coming, part of her brain said. The part that couldn’t help noticing the ripple of muscles under the thin fabric of his shirt.
Going, the terrified part of her soul screeched. Go, quick! 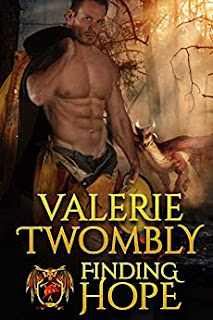 With the holiday bachelor auction coming up, Hope sets her heart on winning a date with Chance. One night threatens Chance’s vow to remain single, but by the time he finally admits they belong together, it might prove too late. Turns out Hope didn’t run far enough and her past may be the end of them both.

Chance had decided to wear only his turnout pants and boots. Even his suspenders hung at his side, giving every lady in the small gym a view that would put a smile on their face until their dying day.
Hot wasn’t even a word to describe him, and when he turned to offer a glimpse of his backside––a back that was sculpted to perfection––Bea Turner, who sat to her right, gasped.
“Lord have mercy.” The woman fanned herself with the paper auction number. “Honey, now that man would make a fine friend with benefits. I think the bidding is about to go nuclear.”
Hope chewed her lip. Bea knew how much this night meant to Hope. It had been difficult to hide the growing crush she had on Chance O’Connell from the older woman. Bea would often wait tables because she loved being around the customers, and when Chance came in, Bea would wink and make sure Hope waited on him.
“I’ve been saving.” She had, but she’d also cashed in some stock a year ago that had threatened to dive. It had been a good thing too because the company had suddenly folded. Her brother, who handled her finances, said the CEO skimmed off profits. Whatever, she wasn’t into watching the stock market and was thankful her brother Eric took care of her money. Right now, the town of Kirkwood was in dire need of cash that these fundraisers brought in. If she could kill two birds by winning a date with Chance, as well as help her neighbors, she was all over it. Maybe spending time with Chance without all the other distractions would finally make him notice she was a living, breathing woman. Either way, the town would get her money because if she did lose, she still planned to donate the funds.
The bidding started at one hundred. Hope held up her number and shouted. “Two hundred!”
“Oh, you go get him,” Bea said, a glint of mischief in her eye.
Another female yelled out. “Four hundred!”
Oh hell no!

Soothed by Magic by Kim McDougall 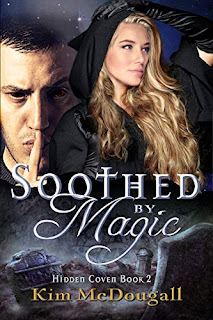 Something is wrong with Bobbi’s new boyfriend. Where did she find such a loser? Her new romance completely blindsided Quinn. And with the demon’s agent loose in Ashlet, he’s scared too. Now he has to convince four powerful witches that the threat is real, and not just to his love life.