Claimed by the Alpha by Laxmi Hariharan 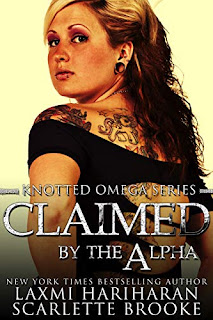 Run little squirrel...  She can't hide from me. I caught her fair and square... Now LUCY is MINE.

“The deal is off.”
She blinks; her chin trembles.
“I have a better idea.” My chest rises and falls, brushing the tips of her nipples.
She shudders. “Wha…what?”
“Let’s cut to the chase.” I peel back my lips, knowing that base instinct inside me is taking over. Knowing I am done talking. Hey, I tried to reason, tried to give her a way out, didn’t I? But I am not a saint or a diplomat. I am a marauder. I am similar to the berserkers who’d taken over her country and set her on the run…to me.
Her breath comes in pants. She licks her lips and straightens her spine. A pulse flicks to life at the base of her throat.
My mouth goes dry. I want to throw her down and tear into her. I need to rut her, now. I clench my jaw, curl my fingers into fists at my sides. “Run, little squirrel. I’ll give you a second chance to escape. If I catch you, you are mine. Mine to do with as I want. Mine to take as I need. Mine to ravish until you are so fulfilled you’ll never think of leaving. Mine to fill, to plunge right into, until there is no me, no you, until we wear the same skin. Until my spirit merges with yours.”
Her shoulders tremble, and the sugary sweetness of her slick rents the air. Her pupils dilate. Her lips part. Fuck me…but she is turned on, and my cock throbs…and I keep my promises. Not. But she still doesn’t realize that. Poor trusting thing. Is she in for a surprise?
I bend down to peer into her eyes. “Go.”

Knock Down Dragon Out by Krystal Shannan 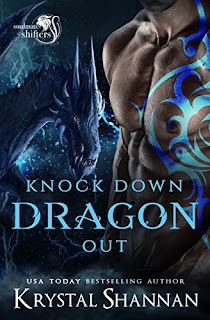 Knock Down Dragon Out is the first book in the new Soulmate Shifters in Mystery, Alaska series. It’s a full-length, standalone fantasy paranormal dragon-shifter romance story featuring a strong human female and an alpha male dragon prince from another world with a propensity for protecting and pleasuring his mate. Happily-ever-after and more guaranteed!

The intense heat of Reylea’s burning air disappeared as he broke through the surface of the portal into unfamiliar blue skies. A blast of bitter cold wind made him blink hard. The land around him was white, and the sun reflected off the surface, blinding him.

He pumped his wings, struggling to adjust to a new gravity. His body dropped, smashing through the trees to the ground below. He thrashed about until he was finally upright and on all four of his claws.

The wind was numbingly cold with a scent on the air he didn’t recognize. Reylea, his home, was all jungle and desert. It was never cold. Never like this… he raised a claw and looked down at the large print it’d made in the white powder coating the ground. He sniffed and licked it, surprised to find that it melted to water on his tongue.

He walked forward from the trees into a large clearing on the side of a hill. Jagged peaks rose around him on three sides. He squinted at the strange brightness. Movement caught his eye to his left. A bugle call of a dragon hunting cut through the air a moment later.

They’d been in this new world only a few minutes. What could the traitors possibly have found to hunt?

A scream broke the silence next.

Col bounded forward a few steps and launched himself into the air.

He pumped his wings, climbing into the sky, and dipped toward the sound of shouts and another scream. Then came the sickening thud of a body slamming against something hard. Had they killed someone? He dove to the ground, shifting just as his claws touched the white powder. Feet replaced claws. He ran forward, through the trees tracking by scent, even in his human form. The two dragons had shifted as well.

The strong scent of the trees burned at his nostrils like the medicine the healers of Reylea used to treat lung sickness.

“Now you’ve broken her,” a female voice screeched through the silence of the woods, like the scream of a panther, sharp and cold and heartless.

Col slowed his run, careful to pick through the trees without sounding like a bellowing river cow.

“Her head bleeds,” the female voice spoke again, this time more annoyed than angry. “Col was right behind us. We need to get away from the portal. He could come through at any moment. She can tell us nothing about this world. This female is of no use anymore.”

“Neither are you, sister.” The male’s voice was dark and angry, brewing like a summer storm on the horizon. 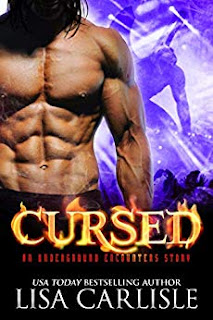 Gargoyle shifter Lucan finds that out the hard way when his ex locks him and his brothers in stone. How will they cope with the curse?

Meet the three gargoyle shifters who guard at Vamps, an underground gothic club. Escape into this series today! 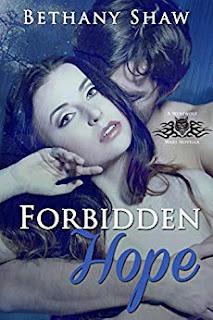 Emily McKinley has been a prisoner in her own home since she began her first heat cycle. She tries to protest her father’s demands, but the more Emily fights, the more dire the situation becomes. Emily must make a choice, stay and lead a life as a submissive female -- or run and put everyone she loves in danger.

When Darkness Whispers by Lisa Carlisle 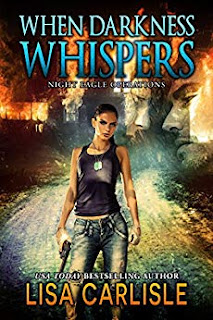 Eva's past is unclear. When her murder investigation leads her to Marcos, it triggers memories she lost. Memories that somehow include him...

If you like haunting mystery, spine-tingling suspense, and Japanese mythology, you won't be able to put down When Darkness Whispers! 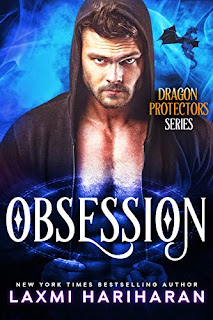 I was convinced that I was destined to walk alone....Until I saw Eve. Every instinct in me screams that I claim her as MINE, but she refuses to accept me. She insists on walking away from me. She expects me to play by the rules. Is she in for a surprise...? 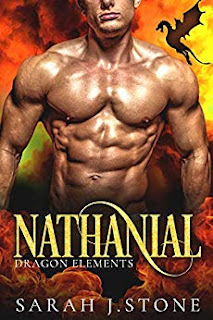 I’ve waited for her for more than a century. Sarah is my second chance at love and I’m not about to let her go. I was shattered when the wolves killed my woman a hundred years ago. But Sarah’s soul has healed me. I’m drawn to her in a way that seems unreal.

A Billionaire's Roar by Vella Day 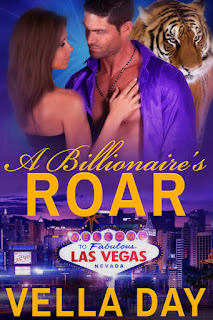 Celebrating her thirtieth birthday in Sin City, Elise Daniels is ready to let loose --but she has no idea how crazy it's going to get. Agreeing to undergo hypnosis, Elise believes she is living out her fantasy with a mysterious, handsome stranger as he fulfills more than just her dreams.

How I Met My Husband by Tami Lund

I love to tell the story of how my husband and I met, because it’s practically a romance novel in itself (although I’ll try to keep it to a short story level here).

Once upon a time, he graduated with a history degree, which lends itself to approximately three career choices, none of which interested him when he was twenty-two. Fast-forward nine years, and he went to broadcasting school, because he’d finally figured out what he wanted to do with his life. I happened to attend his graduation ceremony because one of my best friends had also returned to broadcasting school after college.

At the time, I was living in Louisiana, working in public relations for a nonprofit organization. My family and the friend who was graduating from broadcasting school all lived in Michigan, so I burned my two weeks of vacation to go visit everybody.

I went to the graduation after party with my girlfriend and her brother, and her brother and I sat at a table in the corner and proceeded to put back drinks, while my gf flitted around dancing and chatting with her buddies. After a while, she came rushing up to our table and said, “See that guy out on the dance floor? He wants to know if you’re interested in a one-night stand!”

Sidebar: This is the conversation my husband insists actually happened:

“Hey Lisa, who’s that hot blond with your brother? Is that his girlfriend?”
“No, that’s my friend. She lives in Louisiana.”
“Oh, too bad. Maybe she’s into one-night stands.” (Cue laughter, because he was trying to be funny.)

I, naturally, even though I wasn’t remotely put off by one-night stands, decided to act affronted... So I headed out to the dance floor to flirt with him. We danced. And talked. And danced. At some point in the evening, he fed me cheesecake, and I was a goner.

The next day, I met his parents and introduced myself as their future daughter-in-law. We discussed bridesmaids and groomsmen for our wedding. I met his best friend, who had to approve because my husband apparently had a history of dating poor quality women.

We had an actual date. And then we proceeded to spend every single day of my two-week vacation together. As I prepared to go home to Louisiana, I casually mentioned that the general manager of the local Fox affiliate was a member of my board of directors. You know, in case he was looking for a job. So he gave me his demo tape and I went home, and we decided to try out this whole long-distance relationship concept.

Until a month later, when he flew down to Louisiana for an interview, landed the job, and gave two weeks’ notice at his current gig. And then moved in with me.

Yep. Six weeks after we met, we were living together. Six months later, I had an engagement ring on my finger. Six months after that, we said our vows and were officially married. That was twenty years ago.

I like to tease my husband and tell him this is the longest one-night stand ever.

P.S.: There's a new release coming out soon. Check out my website for details: https://tamilund.com/ 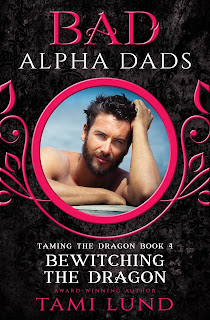 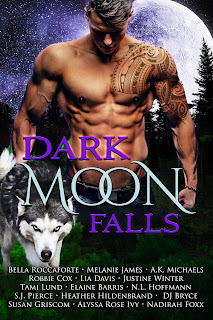