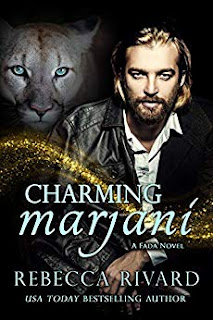 He's rich, sexy...and part-fae. But she's a shifter assassin on a mission -- and can't let herself be charmed...

Marjani headed north toward the ice fae court, running as her cougar.

By noon, she’d covered twenty miles, passing like a shadow by tiny fishing villages and farms with shaggy Icelandic sheep and the smallest horses she’d ever seen. She swerved west, coming out on a deserted cliff above the North Atlantic, and made her way down to the beach, where she shifted back to human. Shedding her backpack, she found her fishing knife and strode naked into the icy surf. Within minutes, she had two fish, which she filleted and roasted on a tiny camp stove.

The taste was fresh and wild. Perfect. She was licking her fingers when a movement on the cliff above made her bolt to her feet.

It was Fane, looking like a freaking model for Iceland Magazine in a silver shirt and worn jeans, long legs braced apart and his golden hair secured with a leather tie. His gaze traveled down her naked body, and his sexy mouth curved.

She ignored the smile to zero in on his ears. A diamond stud glittered in one earlobe, but what made her growl were the pointed tips. He had more fae in him than she’d guessed from his scent.

Without taking her gaze from him, she picked up the fishing knife, flipping it from hand to hand with the ease of long practice. “What the fuck are you doing here?”

“Easy.” He raised a hand, palm out, in a placating gesture she didn’t trust for a second. “I can explain.”

She closed the still-warm camp stove and shoved it into her backpack along with the knife. She strapped the pack on, aware of him watching the entire time. Let him look his fill. One false move and she’d slit his throat.

But he remained on the cliff.

She shifted to cougar and bounded up the cliff, where she snarled right in his pretty face, making sure to show plenty of teeth.

The man was either stupid—or brave. He stood his ground, hands loose at his sides. Not aggressive, but not giving an inch.

She stalked around him, growling lowly.

“I mean you no harm,” he said, which earned him another snarl.

She reached his front and paused, tail twitching in confusion. Her cougar didn’t know what to make of him, but it didn’t scent a threat. In fact, to her cat, Fane smelled somehow right, just as he had last night to the human Marjani.

A smile curled over his lips. “By the gods,” he said in his smoky voice, “you’re beautiful. And you’d rip out my throat in a heartbeat, wouldn’t you?”

Her response was a snarl, but inside, the cougar preened itself at the compliment.

He lifted a brow. “Are you ready to listen?”

She gave one last growl and sat on her haunches.

“Good.” He expelled a breath. “I don’t have much time—I’m supposed to be somewhere else right now.”

She stared back unblinkingly.

“Right,” he muttered. “You know, I’m risking my bloody neck to help you. And you couldn’t give a fuck, could you?”

Another twitch of her tail. Because he was right, she didn’t give a fuck.

His hands curled into fists, a crack in his calm façade.

“I can’t tell you much, or they’ll—” He set his jaw. “It’s not important. But the ice fae king knows you’re in Iceland. Get out of Iceland, Jani. Today. While you still can.”