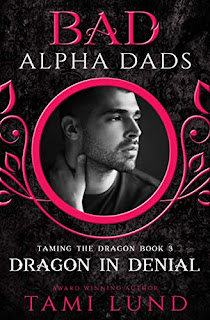 She watched as Bebé headed over to check on the guy in the corner. He asked her something and then glanced up, his gaze clashing with Antoinette’s. A sizzle of awareness shot through her, like dragon’s blood pouring through her veins. She’d never touched the stuff, but Eulalie had said it was like fire roaring through her blood but in a good way. Antoinette had never been able to understand how she could say that sensation was “good.”

She couldn’t be sure of the color from this distance, but the guy’s eyes appeared to be lighter than she would have expected, given his dark skin tone. He had thick, black eyebrows, plump lips, and the beginnings of a beard on his cheeks. She didn’t even need to see the rest of his body; he was gorgeous. And she already knew he had really long legs. He’d be at least her height, maybe even a couple inches taller.

Breaking eye contact, she shifted her focus to her glass so she could fish out the last vodka-soaked green bean. A moment later, a shadow fell across her table. She knew it was that guy without even looking.

He knew her name. She glanced up… and up and up. Holy cripes, he had to be six and a half feet tall, at least. And was he ever built. There were muscles everywhere, and they were big, really big. Including that one tucked behind his zipper, which was practically eye level with her slouching in her seat like this.

Straightening and forcing her gaze north to his face, she said, “Do I know you?”

He rubbed his hand over his closely cropped hair and said, “Well, it’s been ten years. I admit I probably wouldn’t have recognized you either if I hadn’t overheard Bebé say your name.”

“Who are you?” she finally asked, studying his features. Those eyes, they really were lighter than one would expect with his skin tone. Hazel. Almost green.

“Holy shit,” she said, scrambling to her feet, like she was going to—what the hell was she going to do? Hug him? “Ketu?”

The ghost of a smile touched his lips, and he said, “Yeah. Good to see you again, Antoinette.”

She sank back into her seat, her legs giving out on her. His brows furrowed and then he dropped into the chair next to her, his gaze sweeping over her features.

“What happened to your face?”

Right on cue, Bebé stepped onto the patio with two drinks and an ice pack on her tray. The waitress glanced over at the seat Ketu had vacated and then swiftly looked Antoinette’s way. A relieved smile lit up her face as she headed toward them.

“I thought you’d skipped out on me for a second there,” she said as she placed a pint glass in front of Ketu and a bloody mary in front of Antoinette. “Here’s your ice pack, sugar.”

“Thanks, Bebé.” She pressed the cold pack against her face while the waitress walked away.

“So what’s the other guy look like?” Ketu asked, and Antoinette chuckled.

“Way worse, I promise you. So what are you doing back in town?” And why the hell was her heart acting all crazy, like it was trying to beat its way out of her chest? For the love of the gods, it was just her best friend’s brother. And, frankly, she ought to be pissed off at him. He’d left when she’d been at her most vulnerable, when she needed a friend more than she ever had before in her life.