Hi there! I'm Tami Lund, one of your (hopefully fave!!) Wolf Pack authors. A few days ago I was cleaning up the files on my computer and stumbled across an author interview from back when my book, Of Love and Darkness released.

Which, funny enough, was four years ago this month!

Some of the questions and answers were fun and they're still relevant, and who doesn't love to learn a little bit more about the authors whose books they read?

And so I bring you... a resurrected author interview with yours truly!

What is your favorite part of the story, Of Love and Darkness?
I love the way Gavin gradually comes to respect and appreciate Sydney, without realizing it’s happening. Since he’s cursed to believe he’s a Light One (aka a good guy), he’s naturally thrilled to have (so he thinks) inadvertently mated with the last Chala on earth. But when Sydney refuses to accept his claim and insists he court her instead, we get to watch Gavin gradually fall for her, despite himself. I loved writing that aspect of the book. 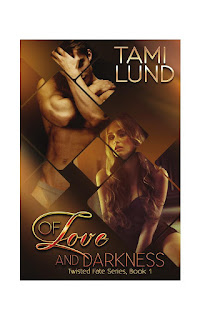 How long did it take you to write Of Love and Darkness?
The first draft only took a month or so, back in 2010 (I was laid off; this was during the recession, and there weren't any jobs so I had plenty of time to write!). Then I kept going back to it, editing, tweaking. Entered it in a couple of contests, received good feedback. Actually wrote all three books in the Twisted Fate series (rough drafts). Sent it to a few publishers. Then I moved on and started working on the Lightbearer Series and basically forgot about this one.

Back then, I hadn't yet started self-publishing, instead I was submitting my books to small presses in an attempt to get published. I committed the Lightbearer series to one publisher, and then a few weeks later, Soul Mates Publishing offered me a contract for that series. I told them I'd already signed it with someone else, but I had this other series and would they be interested? As it turned out, they were!

What is your favorite of all the books you've written?
When I first responded to this Q & A, I said Of Love and Darkness, since that was the book I was promoting at the time, but also because it really is one of my favorites, mostly because I love it when a hero who thinks he's a bad guy figures out he really isn't.

I don't know if I can truly choose one favorite, to be honest. But yeah, Of Love and Darkness is definitely in the top five. It has a reluctant hero, a strong heroine, a hilarious sidekick, and an intriguing storyline. The perfect read for me!

Who is your favorite author and what is it that really strikes you about their work?
I’m not sure if Nora Roberts is necessarily my favorite author, but her book, Birthright, is my all time favorite book. I love the characters, how real they are. I love the second chance at love trope. It’s my favorite. I love the mystery and suspense built into the book, and the secondary storylines, and how there were actually quite a few happily ever afters by the end. It’s really a magnificent book, and I strive to write like that, every single day.

What is your typical day like?
Busy. I have a day job plus this writing gig, which is practically a fulltime job on its own. I also have a husband, teenager, and dog who occasionally like my attention (well, maybe not so much the teenager...). I also like to garden and I like my house to be clean and I don't like to exercise but neither do I want to gain so much weight that I have to buy new clothes and when Game of Thrones was on of course I watched it and... Like I said, it's busy. Always busy.

How do you overcome writer’s block?
What's that? No, seriously. I suspect it's because I don't have enough time to actually get all those ideas out of my head and onto the laptop, but writer's block isn't a problem for me. Perhaps, someday, when this is my only fulltime job, I can revisit this question and there may be a different answer. Although I certainly hope not since I'll need to keep on writing to produce an income!

Can you share a little of your current work with us?
I just released the third book in my Taming the Dragon series, on May 31. It's called Dragon in Denial, and it's also part of the Bad Alpha Dads series that is written by multiple authors. (Side note, I've read quite a few books in that series and they're all good, so I encourage you to check them out!)

Now I'm working on the fourth book in that series, which is currently titled Dragon Daddy Issues. That won't be the final title, of course, but I think it's funny and I needed to name the file, so there we have it. This book continues the dragon's blood storyline from the first three books, and focuses on Rahu and Becca's budding attraction. Readers meet both of these characters in the second book, Hungry Like a Dragon. It's fun writing Rahu, who is a bit of a goof, but has his reasons, which of course you'll learn about when this book is released. I'm hoping that will be in September, so I'd better get busy, huh!

What book are you reading now?
It's not a paranormal, but it's based in New Orleans (where most of the books in my Taming the Dragon series are based) and there's a love triangle and I'm thoroughly enjoying it. It's called My Best Friend's Mardi Gras Wedding by Erin Nicholas.