Open the Magic by Tami Lund 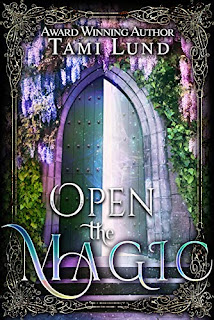 A collection of paranormal short stories and novellas that include shifters, witches, demigods, and of course, magic!

“I know Christmas is still a few days away, but I’ve brought you a gift, to prove to you I’m sincere.”

With the horse’s reins in his hand, Asher paused before rounding the corner of the stone building, cringing at the sound of Prince Julian Montclair’s oily voice.

No doubt he was talking to Princess Charlotte of Mecosta. Julian had been chasing the princess’s skirts since that day, ten years ago, when he’d come across Asher and Charlotte kissing in the woods and had been so furious, he had Asher thrown into the dungeons beneath his father’s castle.

Sure, Asher was a pauper, and the princess—well, she wasn’t supposed to be locking lips with someone so beneath her station—but gods be damned, they’d been thirteen at the time. The punishment hadn’t exactly fit the crime.

Asher had intended to give Juniper a run, but not if it meant he would have to interact with those two. Shaking his head, he turned to trudge back to the stable, but paused when Charlotte spoke.

“Why do you think you need to prove your sincerity by giving me a necklace, Julian?”

“You insisted that was entirely innocent. Are you changing your story?” Charlotte’s voice was frosty.

“No, not at all. It’s just … I know you were upset by it. Even if it was innocent. Because, of course, it looked … well, we all know what it looked like.”

Asher leaned forward to better catch her response, which was silly since he doubted she would say, “It looked like you were trying to convince that serving girl to share your bed that night. And considering you’re a prince, it probably happened. Even though you’re supposed to be courting me and treating me like the princess I am, the queen I will someday be.”

But in fact, she didn’t say anything at all, and eventually, Julian cleared his throat. “It’s enchanted. See how it has started to glow with a blue light? That’s how you know your one true love is near.”

Yeah right. An enchanted necklace? Asher could conjure magic like that in his sleep. And he’d bet last week’s pay that Prince Julian paid someone to cast a charm over it. Because everyone and the gods were fully aware the man could barely invoke the simplest of spells.

But power and control were all about the station one was born into, and Julian Montclair has been one lucky son of a bitch—no, son of a queen—since the moment he came into this world.

“It’s lovely,” Charlotte said. “And it’s warm to the touch.” Her voice drifted over Asher, making him hard like it always did. He grit his teeth, angry with himself for being so stupid. There were plenty of women in the village who were of an acceptable station and perfectly happy to warm his bed for a day, an hour, a year, however long he was willing—and he wouldn’t end up on the gallows the next morning, either.
Yet all he did was yearn for a woman he couldn’t have. A woman he didn’t really want.

“It’s channeling my feelings,” Julian’s unctuous voice said. He was touching her, too, no doubt. He’d likely removed his gloves so he could rub his hands over her arms, his fingers probably grazing the sides of her breasts. Asher had seen him do it too many times to those serving girls he swore he wasn’t sleeping with. It was his signature move.

Clearly tired of skulking here instead of going for the ride Asher had promised, Juniper nickered and pawed the ground.

And then the princess stepped into view, resplendent as ever in a pale blue cloak lined with white fur, white leather gloves, and a matching hat perched at a slightly off-kilter angle on her golden curls. Those almond-shaped blue eyes widened for a moment when her gaze fell onto Asher, and the sides of her rose-colored lips lifted into a smile. For him. And the fact that they moved at all meant she hadn’t been smiling before.

Gods be damned, he’d spent his whole miserable life pining for things he couldn’t have, and this woman was most definitely the farthest out of reach of all his unobtainable dreams.