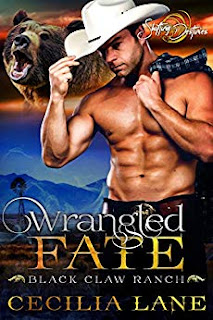 Tansey is on the hunt for her missing brother -- and the gorgeous cowboy on Black Claw Ranch holds the answers. Ethan’s shifter instincts warn him Tansey’s a terrible danger -- and not just because his bear is roaring to get more of her honeyed scent.


Then shots ring across the Montana range. The threats to his feisty, fated mate are closing in…

“The Valdana pack?” His whistle plummeted with all her hope. “Fuckin’ A, woman. Do you have any idea the trouble you’re in?”

“I know they tracked him here—to you. I know you’re hiding something. Tell me what happened to Rye.” She wasn’t about to let him twist her into a different conversation.

“And you trust them? How did a pretty girl like you get tied up with them anyway?” His expression darkened and a muscle jumped along his jaw. “You one of them wolf hounds?”

The derision in his voice left no doubt what he meant. Tansey bristled. “No,” she spat. “I’m not sleeping with any of them. Not that it’s any of your concern. They’re helping me find my brother—”

“You said that already. Maybe he doesn’t want to be found.”

“How would you know? Did he tell you that himself?”

Ethan growled, and she hated how much she liked the noise. She could almost imagine feeling it vibrate through her.

“Don’t know him, never met him. Tell Viho to stay the fuck off my land when you go crawling back to him. Have a nice life, Miss Nichols.”

His words washed away the brief flush of desire. Tansey resisted the urge to stomp her foot. She just wanted to go back to the way things were a month ago. She knew where Rye was, knew what she’d be doing in the morning, knew where she’d go to bed at night. It wasn’t a glamorous life, but it was an easy one.

The safe familiarity had been replaced by Viho’s lack of respect, potentially no loyalty or trust from her brother, and a mouthy cowboy shredding all her plans to set her world right again.

With a final tip of his hat that felt like a slap in the face, Ethan turned back toward the barn.

A month of zero leads, worry, and frustration boiled over into hazy anger. He did not get to walk away from her!

Tansey reached inside the door of her car and then took careful aim. Her thumb brushed back the hammer.

“You’re going to tell me where Rye is. Now.”