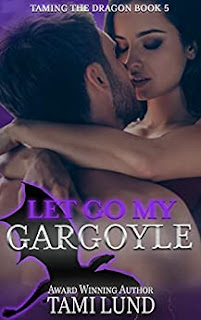 Four years ago, dragon shifter Sofia had an affair with a gargoyle. The next morning, he disappeared—leaving her with a three-month-old baby.
Now he’s back to protect her and the child from an unknown danger, without entangling his heart. A task he doesn’t think he’s capable of doing...

Several thoughts hit Sofia all at once.
One, she’d definitely slept for more than three hours.
Two, Penelope had not woken her, which was concerning.
Three, there was someone else in the house besides her and Penelope.
Even more concerning.
She sprang out of bed and snagged a robe to cover her camisole and panties. Pulling open the door, she hurried down the hall until she came to a stuttering halt at the entrance to the living room.
Penelope, in her pajamas, her hair an uncombed rat’s nest on her head, sat cross-legged on the floor, with Pinky the purple dragon in her lap, her tongue thrust between her teeth as she focused on the game of Candyland spread out before her.
Griffin sat across from her, watching as she calculated her next move.
What in the world?
Sofia didn’t need to bother asking how Griffin had gotten into her house. She’d witnessed his ability to bypass locks just last night. Still…
“What are you doing here?”
He glanced up, his gaze lingering on her bare legs beneath the short robe, and her dragon, dormant for far too long, lifted her head and took notice.
Great. He isn’t even a dragon.
So? her dragon replied.
Sofia shook her head. Now was not the time to get into a discussion of species with her beast.
Penelope glanced up and waved. “Hi, Mommy.”
Sofia’s heart melted a little every time she heard that moniker. She hadn’t intended for Penelope to call her mommy, but the first time she had, Sofia’s fierce protectiveness of this child had quadrupled, and it had only increased in strength every day since.
Griffin nodded at her daughter. “We were letting you sleep in.”
Sofia frowned. She felt… fantastic, in truth. How much sleep had she gotten?
“It’s ten o’clock,” Griffin supplied, like he could read her mind.
Good gods, she hadn’t slept this late since the day before she’d spent that fateful night with Griffin, four years ago.
“Why? How did you even know? How…?”
He nodded at the window overlooking the backyard. “I stayed watch last night, outside Penelope’s bedroom. When I heard her wake, I came inside and convinced her to let me make her breakfast instead of waking you up to do so.”
“You…” Apparently, a full night’s sleep rendered her incapable of completing a sentence.
“Coffee,” Griffin said, hopping to his feet. “You need some.”
“She drinks a lot of coffee,” Penelope supplied.
That kid. Sometimes she was too honest.
“Come on,” Griffin said, motioning to Sofia to join him in the kitchen. Instead of pouring her a cup of joe, as soon as she was close enough, he grasped her arm and squeezed. Sofia’s dragon started prancing around like a dog about to be handed a bone.
Down, girl.
“We need help,” Griffin announced.
“Huh?” Sofia gave the half-full carafe a longing look.
“I know as a gargoyle my main job is to protect those who both need and deserve it, and you and Penelope certainly qualify, but-but I…that’s not been my main focus for the last few years. At least not, well, not to this extent.”
Why was he telling her this? “We’ve been managing by ourselves for four years, so if that’s your reason for returning, you can go ahead and fly back to New Brunswick now. We’re fine.”
He canted his head. “You remember where I’m from.”
She remembered a lot about that fateful night. Too much.
Elbowing him out of the way, she pulled a mug out of the cabinet. In childlike scrawl, the words “World’s Best Mom” were written across the white surface along with a bunch of terribly drawn flowers and dragons. Penelope had made it for her at daycare for Mother’s Day last year. It was a human daycare, run by the church two blocks away, and Sofia had enrolled her partially to ensure the kid had some sort of social interaction skills prior to starting kindergarten, but also so that Sofia could catch a few hours’ extra sleep three days a week.
She added a dollop of creamer to the cup and then filled it with steaming, dark liquid before lifting it to her nose and breathing deeply. She took a tentative sip and sighed.
Someone made a strangled noise, and she opened her eyes. Griffin stared at her in a way she didn’t quite recognize. Did he think she was insane? Or was that attraction in his dilated pupils?
It was hard to tell.