Her Alpha by Fiona Davenport 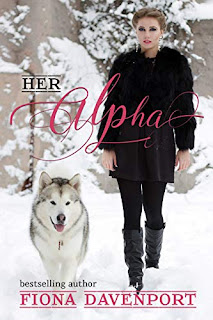 When Larissa Nash went looking for her best friend, she never expected to find her in a town full of shifters. She didn’t even know they existed until Kace Lowell clued her in on the secret by shifting into his wolf.
Mating a human was complicated for the alpha of the pack, but Kace was more than ready to take on anyone who dared to challenge Larissa’s place in his life.

Her blond hair was disheveled, with one long lock curled around a plump breast. Twin spots of color filled her cheeks, standing out against her fair skin. If she had the power to kill me with the glare from her pretty blue eyes, I would’ve died on the spot. She was a fierce little thing, and both sides of my being heartily approved. Being mated to the alpha was a challenge for shifter females and even more so for a human. Her intensity would serve her well as she took her rightful place at my side. But first, I had to convince her that was where she belonged...before my wolf broke free and clamped his teeth into her shoulder when she didn’t even know what the hell was going on.
Holding my hands up, palms toward my gorgeous mate, I murmured, “Relax. You’re safe. I’m not going to hurt you.”
“Relax?” she yelled, her eyes narrowing as she pointed her index finger at me. “I don’t know you.” Her middle finger joined the first. “You just carried me out of my best friend’s boyfriend’s house while I was kicking and screaming for you to put me down.” Her ring finger got in on the action before she waved her hand in a small circle. “You brought me to another house, locked the door before putting me down, and you’re standing in front of it to block my exit.” Her hand dropped, and she pressed her fists to her hips. “Don’t you dare tell me to relax after doing your best to scare the crap out of me.”
Knowing she was afraid of me was like an arrow to my heart. I wasn’t about to let her escape until I had the chance to explain who she was to me, but I could at least give her access to the door since I was fast enough to catch her if she somehow got past me. Taking a few steps to the left, I apologized, “I’m sorry. I didn’t mean to scare you.”
Her gaze slid to the door before returning to my face. “You do realize how ridiculous that sounds, right? How else did you expect me to react to the stunt you pulled? You can’t just go around kidnapping people and then act all surprised when they’re afraid.”
“It worked for Zeke,” I grumbled, wondering how my beta had gotten Allegra to accept him so damn quickly.
“I’m still unclear on exactly what happened between my best friend and Zeke last night, but I’m pretty sure you can’t compare him rescuing her from a car accident to you carting me off in the middle of a conversation you weren’t even a part of.” The cutest little wrinkle formed in the middle of her forehead, and I wanted to brush my lips across it. “He was acting like a hero, but what you did was more along the lines of a villain.”
My wolf almost went berserk at the possibility of my mate preferring Zeke over me. I held still, forcing my beast to remain within my skin until she was ready to meet him. Once he was no longer ready to tear across the street to rip Zeke’s throat out, and I had him back under control, I prowled closer to my mate. My lips curved up in a satisfied smirk when she held her ground, refusing to back down from me. There was only the slightest whiff of fear in her delicious scent. No matter how scared my mate thought she should be, she felt the pull between us the same as me, and it was stronger than her uneasiness with the situation. “You can kid yourself all you want, but Zeke would’ve done the same damn thing with Allegra if he’d had to.”
“I find that difficult to believe,” she scoffed with a frown. “He’s the freaking sheriff. It’s not like he’s going to run around kidnapping women when his job is all about upholding the law.”
I shrugged my shoulders, and my smile widened. “So what if he’s the sheriff? I’m the mayor of Timber Ridge, and that didn’t stop me from taking you out of his house.”