Wishes and Warlocks by Lori Whyte 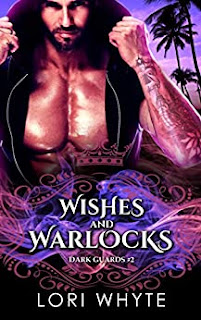 Sophie thinks her magic makes her untouchable, not a target. But sorcerers want to take it. Use it. Kill with it. And if Sophie dies too, who cares? Reed, her bodyguard, cares. Too much. He vows to protect her, even if it costs his life or, worse yet, his heart.

Instinct made him draw nearer. Despite it having failed him once, he trusted it now. And it told him to help the princess. He couldn't leave her suffering like this. He had to do something. Screw protocol.
He pulled the protective white glove from his hand.
"Don't do that," a voice warned him through his earbud.
Screw that too.
He reached for the woman with his bare hand. She cringed.
Was he as bad as all that?
Maybe.
He paused, uncertain for the first time since entering her cell. Could she see inside his soul?
No. He'd read her file. Her magics didn't work that way. She could heal or she could kill, but she couldn't do anything else to him. And although he'd long since accepted he would die for the Coalition if he had to, he was sure that day wouldn't be today.
So he followed her as she retreated. When his hand made contact with her, she gasped. Her whole body convulsed as she recoiled from him.
"Stay away." Her whisper was hoarse. She tried to squeeze deeper into the corner. Zeus, she was more afraid of herself than him.
He'd seen the video from her assessment when she was a child. It was standard protocol for the guards to know the details of an inmate's skills. If she decided to release her gifted magic on him, he would suffer a painful and gruesome death, but he wrapped his hand around her forearm anyway.
She froze.
Her bloodshot eyes widened with surprise, but she let him lift her arm, this was the one that wielded her deadly magic. Her hand dangled limply. Broken and dirty fingernails capped each grubby finger. A strangled moan erupted from the back of her throat when he brushed her scarred skin with his thumb. He'd seen the gauntlet she'd been forced to wear since she was a little girl. The iron encasement must have rubbed her skin raw in the beginning, until the soft vulnerable layers scabbed over. Nothing remained now but twisted ruined flesh.
He could easily imagine the tears she would have shed. The pain. He understood that. Better than most.
Reed turned the princess's delicate hand so her grimy palm faced him. She yanked it back, pulling against his hold, but he didn't let her escape. Her fingers were curled like little claws, likely frozen in that shape after so many years of disuse.
"West," the voice in his ear warned, "these actions are not authorized. If you become ill from this reckless behavior, your insurance will be void."
Yeah. Whatever.
The princess's gaze darted over his mask. She wouldn't see his eyes through the protective gear, and he didn't want to risk removing it. If he revealed himself now, she might retreat even further. His mother had told him his eyes lacked a soul. That he was nothing but a monster. The fragile princess didn't need to see that.
He nodded slowly, encouraging her to trust him. Trust herself. Then he lifted his other hand and cradled her tortured flesh in his cupped hands.
She stared at him. Her mouth gaped.
"Who are you?"
Gradually, he shifted his hands. She closed her eyes, squeezing out a single tear, but she didn't try to stop him or pull away again. When his palm pressed against hers, she whimpered. Then, with a shuddering sob, she opened her eyes and stared at their linked hands.
"I. Am. So. Sorry," she said between hiccupping sobs.
He squeezed her hand slightly and shook his head. She had nothing to apologize for. He hated that she felt she did.
Then she peered up at his mask again. "Why do you want to die?"
He shook his head again.
"Retreat, West," the voice in his ear commanded. "Now. Go to the decontamination room."
He didn't move. Some orders were more imperative than others. This wasn't one of them. He sat with her until her tears subsided and her breathing settled to a normal rhythm.
Even then he was loath to release her hand.
It was ridiculous. Crazy.
She wasn't the monster here. He was.
And he wanted everyone to know it.