Beneath a Blue Moon by Carrie Pulkinen 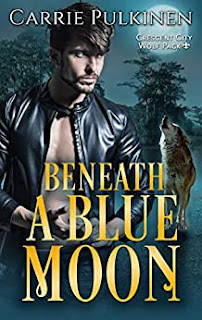 Can a witch and a werewolf overcome their haunted pasts to find love, or did fate bind their hearts only to rip them apart?

“What exactly is the curse?” he asked.
“Any witch who shows me kindness will be punished.” She lowered her gaze, and he stepped closer, taking her in his arms.
“Did it specify that it had to be a witch?”
“Well, yes.”
He smiled. “Rain, I’m a werewolf, not a witch. Your curse won’t affect me.”
She traced her fingertips along his jaw. “What if one of your ancestors was a witch? If you have the slightest amount of witch blood in your veins, it could…”
“I don’t. I swear, I am one hundred percent werewolf. Look at me.” He cupped her cheek in his hand, drawing her face toward his. The sadness in her eyes tugged at his heart. She’d opened up to him, finally letting him into her world, and now he understood her hesitation. “I’ll take my chances.”
She shook her head. “If anything happens to you…”
“Then it will be on me. You’ve warned me. I’m aware of the risks.” He leaned closer, the tip of his nose brushing hers.
“Chase.”
“I know you won’t hurt me. Please let me in.” He paused, his mouth lingering centimeters from hers, giving her plenty of time to move away. When she didn’t, he brushed his lips over hers.
She responded, leaning into him, running her hand up his thigh to grip his hip. As her lips parted and her tongue slipped into his mouth, fire shot through his veins. She tasted like peppermint, as sweet as the cakes she baked.
He couldn’t stop the moan vibrating from his throat. His fate-bound mate was wrapped in his arms, and he wanted to taste every inch of her. He trailed his lips along her jawline and nipped at her delicate earlobe. Her breath hitched, and she tilted her head, giving him access to the sweet curve of her neck. He kissed his way down her throat, pausing to feel her pulse race beneath his lips, the intoxicating scent of her skin making his head spin.
She bit her lip and rested her hand on his chest. “Are you sure you don’t have any witch in you?”
The warmth of her touch through his shirt made him shiver, and he longed to feel her bare skin against his. “Positive.”
She leaned closer and whispered into his ear, “I think I’d like to have a little werewolf in me.” She nipped his earlobe, and a flush of fiery heat spread through his chest.
“There’s nothing little about this werewolf, cher.”
“I’d like to see for myself.”