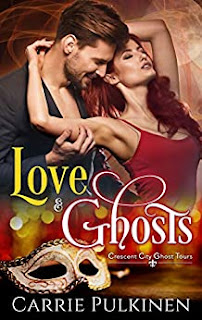 He sees dead people.
She refuses to believe they exist.

“Do you want to come inside?”
Of course, he did. But was it really what she wanted? If only he could read living people the way he could ghosts.
He put his hands on her shoulders and pushed her just far enough away to see into her eyes. They sparkled with passion and mischief, and he could have taken her right there on the landing if they weren’t so close to the street. “Do you want me to come inside?”
Her tongue slipped out to moisten her lips, and his knees nearly buckled beneath him. She slid her hands down his chest and hooked a finger in the waistband of his jeans, pulling him toward her. “I wouldn’t have asked if I didn’t want you to.”
She reached behind her, opened the door, and pulled him through the threshold. Her hungry gaze traveled up and down his body as she slipped her hands beneath his shirt. The feel of her soft fingers against his skin had his core tightening, his entire body aching to feel her close to him, on him, with him.
“I want you, Sean.”
He wanted to respond. To say he wanted her too. But hearing those words from her lips rendered him incapable of speech. He slid his hands down to the small of her back, pulling her close, trailing kisses up one side of her neck and down the other.
He didn’t just want this woman. He needed her…