Rise of the Fire Witch by Lisa Carlisle 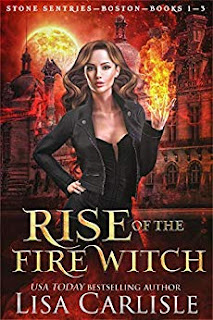 Roman, Commander of the Stone Sentries, is on high alert as he patrols from a Boston rooftop. The eclipse of the red Supermoon bodes danger. When a blast of dark magic soars past him, he tracks a beautiful, mysterious woman... Is she dangerous? Or is she in danger?

What troubled the brunette? An instinct to protect her kicked in. The pull toward her was compelling, a sensual onslaught that overpowered him.

Remember why you're here.

Roman stepped back, both mentally and physically separating himself from the woman, and shielded himself behind the bar. That compulsion was one he'd never experienced, and not knowing what it meant bothered him all the more. All the uncertainty about tonight had him on edge.

Turning away, he gulped in the cool night air. It invigorated him for only a moment. What hit him next almost knocked him off his feet--a sudden whoosh of energy. It blasted past him with immense force and power, indicative of dark magic.

A gut feeling made him turn to locate the brunette, and he scrutinized her. He sensed something unusual about her than the other humans on the roof. Was she the source of that dark magic? He opened a mental link to communicate with Arto.

There's a woman on the roof I'm going to keep an eye on.

Is she in danger? Or is she dangerous? Arto asked.
Good question. That's what I plan on finding out.
Posted by Ronda at November 14, 2019