Her Wolf by Fiona Davenport 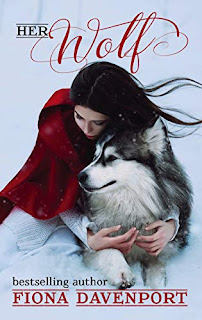 Allegra Hale had no idea shifters existed when she headed off to college with her two best friends. Let alone that her campus was near a shifter town. But that all changed when she got into a crash and was rescued by Zeke Blakesley—the wolf shifter who insisted they belonged together.

“What kind of trouble did you manage to get into in a college town full of humans?”
“The new waitress could’ve passed for an octopus shifter with how handsy she tried to get with me.” I shuddered just thinking about it.
Kace cringed at the analogy. “Hopefully, you can duck into their place without her spotting you.”
“It’s not just her, man. I swear, all the girls who go to that school are boy crazy,” I grumbled as I got to my feet. “Whenever I’m in Stewart, at least one of them tries to throw herself at me. If she were my mate, I’d be all over that shit, but none of them have been, and they don’t take no for an answer. Then when I finally manage to untangle myself, their fucking scent clings to my skin, and it’s all wrong. My wolf gets pissed, and the drive feels as though it takes for-fucking-ever before I’m back home and can wash it off me.”
Kace grabbed the last few chicken wings before standing, too. “Maybe you’ll get lucky this time around, and the girl throwing herself at you will turn out to be your mate.”
“It’s not gonna happen. I’m just not that lucky, as proven by you barging in here and interrupting my night,” I denied with a shake of my head. “That’s not taking into account how I’m headed to a town full of humans who don’t even know shifters or fated mates exist.”
“I wouldn’t care if my mate was human as long as I found her.” Kace flashed me a chiding look, and I felt like shit since I shouldn’t have needed the reminder. My irritation over my change in plans had me saying shit I didn’t even mean. “It won’t matter if yours is a wolf shifter, human, or can turn into a fucking goldfish. She’ll be the best thing that’s ever happened to you because she’s your mate.”
“Damn straight,” I agreed with a small smile as I pulled my coat off the hook by the front door and shrugged it on.
He slapped me on the back as he passed me to head down the sidewalk to where his car was parked at the curb. “You never know. Fate works in mysterious ways sometimes.”
Kace’s parting words echoed in my brain while I drove to Stewart. It wasn’t surprising since mating was a driving force for all shifters. We didn’t feel complete until we found our mates, the other half of our souls. I’d put up with that irritating waitress a thousand times if it helped me find her...the one who was meant for me.
After parking a few doors down from my destination—on the opposite side of the diner because it was insane to think that running into the waitress would actually help—I climbed out of my truck. My wolf pushed against my skin before I even got the door shut, and it took a moment for the reason to click in my head.
The faintest hint of a strawberries and cream scent filled my nostrils. It was unlike anything I’d ever smelled before. The alluring scent could have only come from one source—my mate.
Mine.
It took all my willpower to keep my human skin as my wolf fought to break free. As it demanded we find our mate. Now.
The only reason he pulled back was that my human half was just as anxious to track the sent to my mate. Scanning my surroundings, I didn’t see anyone nearby on the sidewalk. But the car that had just pulled away from the curb as I had turned into my parking spot was only a couple of blocks down the street. Thinking back to the moment before it had left, I remembered that a woman had climbed into the back seat. She had been less than ten feet away from where I was currently standing so the lingering scent had to be hers.
My head swiveled in the direction the car had gone, and I sprinted toward the horrifying sight in front of me.