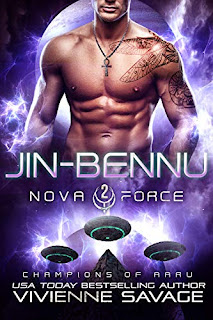 Journey through the stars in the follow-up to Tal-Amun as his alpha second-in-command Jin-Bennu finds love in the most unlikely place.
When psychic commander Jin-Bennu flies out on a secret mission, his cover is that he's returning home for R&R. He doesn't expect to find a gorgeous human researcher stowing away on his personal ship.
Veryn has orders of her own to follow and plans for a romantic weekend. Instead, she'll find the flight of her life. And a battle to win a certain Lexar's heart...