Unleash the Darkness by Valerie Twombly 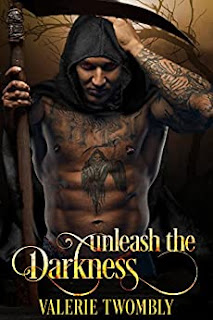 Created from light and dark, Sephtis is bound to both Heaven and Hell. Calling upon his reaper unleashes a power even demons fear. Only Evangeline keeps him from crossing over to total darkness.
When a stranger comes between the couple, the two angels become entangled in a web of evil that will put their love to the ultimate test.

Eva? Seph didn’t want to believe what his gut... No. What his soul told him. His mate was gone. Where? He had no idea, but he knew who to ask. Rather than panic, he allowed his anger to bubble to the surface. He stopped outside his home, knowing there was no reason to go inside. Instead, he reopened the portal to Hell and dived in. When he landed, his boots cracked the ground under him. He reached out again.Evangeline? Only the groans of Hell greeted him.With a snarl, he summoned his reaper. Rushed the transformation and welcomed his darker side. Once complete, he cut a path of destruction––leaving only blackened ground––straight to Lucifer. When he arrived, he fully expected to find the demon king sitting on a throne, but the room was as he had left it.The box. He stormed to the box with every intention of smashing it against the rocks, but when he reached for it, he was knocked backward.You cannot destroy me, Reaper. You took my mate. I want her back or I will destroy you. A cynical laugh.I did no such thing, but I will find out who did and thank them personally. They saved me the trouble. You’re a fucking liar. Not now! Lucifer laughed again.Perhaps it’s your mate’s soul you’re to collect this time. Seph curled his bony fingers together and punched the wall next to him. The room shook under his anger and the crystal cracked, but everything held. He went down a checklist of options and found he only had two. Neither of which he liked one fucking bit.Leave his mate to whatever fate awaited her and stop Lucifer’s plan. Or cave and give Lucifer what he wanted. Trouble was, there was no guarantee Eva would be returned to him. Perhaps he should take a third option and call for reinforcements. Could the Maker find his mate?