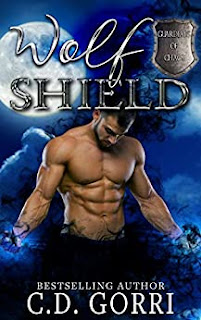 Hudson Stormwolfe is a Guardian of Chaos. His order is tasked with keeping magic free, to ensure the flourishment of all beings through innovative thought and creativity, without fear of persecution. But what happens when a woman gets caught in the war between supernaturals?

“You can just back the hell up!” she held up her hand in a feeble attempt to ward off the brute, “What the hell are you guys?” she asked again.
“You’re about to find out,” the biggest of the three reached out and grabbed her arm.
He pulled and Fergie, being herself, slid on the slick asphalt. To keep from toppling forward, she had no choice but to grab onto her attacker with her free hand. When she looked down, she saw with growing horror that his skin was covered with green mottled scales and he was oozing some kind of slime. But that wasn’t what made her scream, it was the long gnarly claws that tipped his freakishly strong hands.
“Ouch,” Fergie pulled back from him, shifting her weight too fast in her high heels.
She fell backwards, landing on her ass, which of course, made her scream again. The asphalt was uneven and damn it, it was hard too. It stung even her plump bottom, but that still didn’t hurt as much as the three long scratches on her forearm.
“I’m bleeding!” she shrieked once she realized he broke skin.
Red droplets welled up from the laceration and she suddenly felt woozy. She looked up and was confused. The giant reptile-man who’d just attacked her was flying.
Wait, not flying exactly. He was being lifted into the air, and, ooh, tossed away like the piece of trash he was! But what if whoever just attacked him was coming after her next? Fergie swallowed down her next scream and found the source of her assailant’s sudden airborne abilities.
Holy hotness. She stole a quick glance at the man, all six and a half feet of him, that stood in a defensive position in front of her. The hiss of her remaining attackers had her eyes darting to them, but the resounding snarl coming from her rescuer brought it back to him.
Up and up she looked to search out the source of that ferocious sound. She wanted to see his face, to look into his eyes to determine if he was friend or foe. Fergie had to work to ignore the warm feeling that grew deep in the pit of her stomach as she first took in the pair of large, muddy boots.
Those were followed by big, strong calves, and thick, muscular thighs encased in tight denim. She bit her tongue, glancing over the impossibly large bulge beneath the stranger’s fly, and allowed her gaze to travel even further up. She noted with giddy pleasure the rock hard abs, defined pecs, and bulging arms that were outlined to perfection in the thin white cotton t-shirt he wore.
Finally, she got a look at her hero’s face. Fergie almost swallowed her tongue as her eyes met the glittering sapphire stare of the hottest guy she’d ever seen. Dark, short-cropped curls crowned his head, complete with a smattering of facial hair that seemed to thicken before her eyes. A trick of the light no doubt, but it was his rough-hewn features that made him all the more mouthwatering.
The stranger seemed to growl at her, but she was positive he wasn’t hostile. Somehow, she knew he was there to help. Just like she knew out of all the men there, he was the deadliest.
“Are you okay?” he growled.